In 2020, Fusions & Acquisitions Magazine was able to identify 1,011 M&A and private equity transactions involving at least one French company, with a total volume of EUR 101.8 billion, a 20% decrease compared to 2019 (EUR 126.6 billion). The number of transactions decreased by 18%.

By far the largest deal of the year by value was Worldline’s acquisition of Ingenico for EUR 9.5 billion (including debt), creating a new global leader in payment services.

The boards involved are – on the Worldline side – Morgan Stanley, Société Générale and BNP Paribas. Ingenico was advised by Rothschild & Co and Goldman Sachs. Bank of America acted as legal advisor to Bpifrance, an Ingenico shareholder.

This deal makes Worldline the world’s fourth largest pay­ment services provider, with more than 20,000 employees and a presence in more than 50 countries. The new com­pany provides payment services to nearly one million merchants and 1,200 banks and financial institutions.

Capgemini’s friendly takeover bid for Altran of EUR 5.1 billion (including debt) came in second. The merger will create a group with revenues of EUR 17 billion and more than 250,000 employees. It will enable Capgemini to accelerate its development in large technology companies and the Internet. Thanks to its centres of excellence, particularly in India and Eastern Europe, the new group has critical mass in software engineering.

Third place on the podium in terms of value comes from the nearly EUR 5 billion roundtable recomposition of Ceva Santé Animale, advised by Lazard.

The 4 new investors are: Téthys Invest, the investment holding company of the Bettencourt-Meyers family; Canada’s PSP Investments; Japan’s Mitsui & Co and Germany’s Klocke Group, whose animal health business IDT was acquired by Ceva in 2019. They join French shareholders, the “Amis de Ceva”, who are investing again in this 5th financing round, namely Sofiproteol and Merieux Equity Partners.

Also worth mentioning is the sale by Sanofi – advised by Bank of America – of its stake in the US biotech company Regeneron, accompanied by Goldman Sachs (a deal worth EUR 4.55 billion).

A total of 12 domestic deals worth EUR 500 million or more were completed in 2020, including 4 private equity operations. 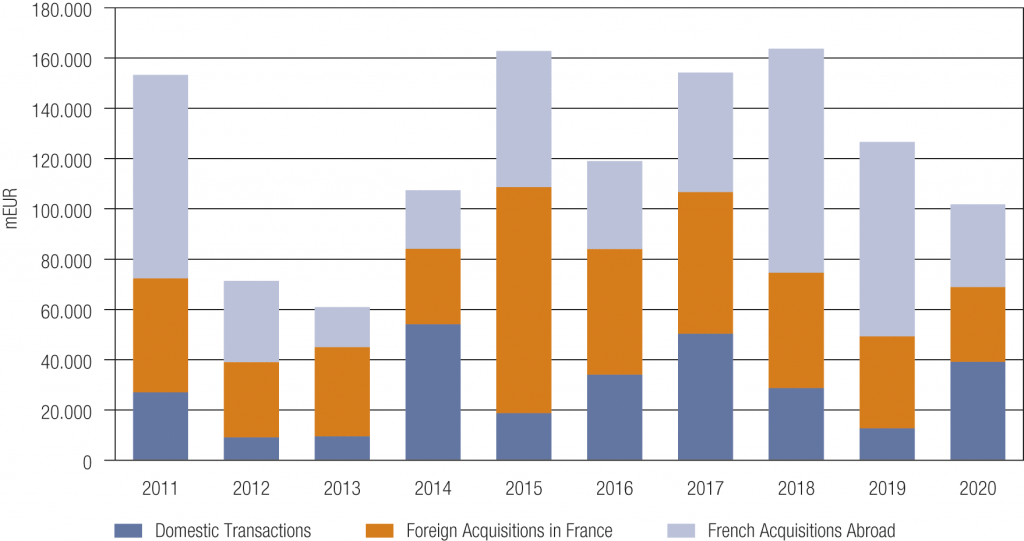 The preferred destinations for the French in 2019 were the United States, Poland, India, Portugal, the Netherlands and Germany. 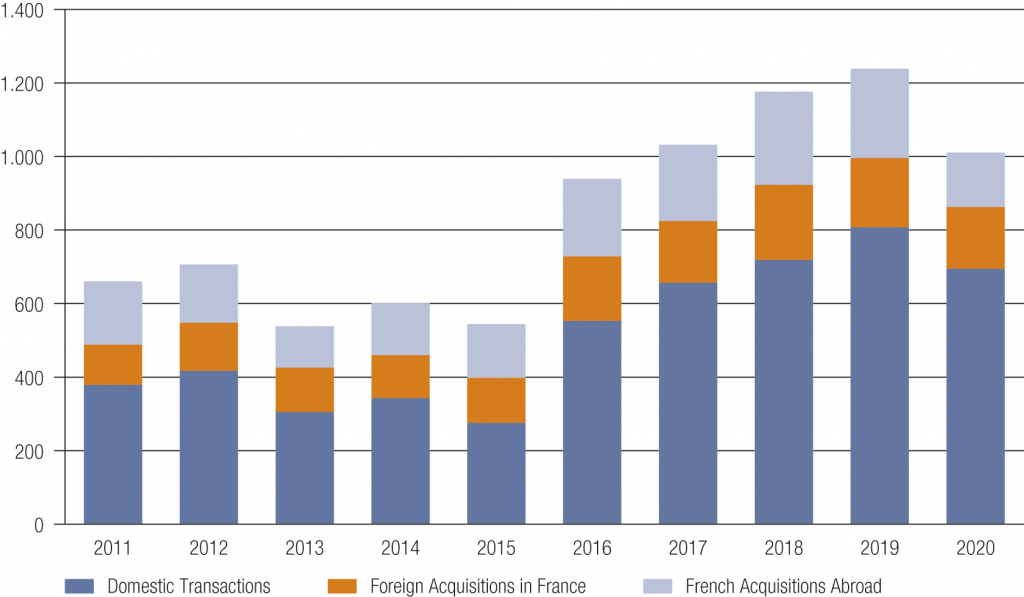 In 2020, a total of 13 transactions worth more than EUR 500 million were identified in this sector. Parmi and 7 private equity transactions.

The main countries of investment in France in 2020 were the United States, Sweden, China, the United Kingdom and Belgium. 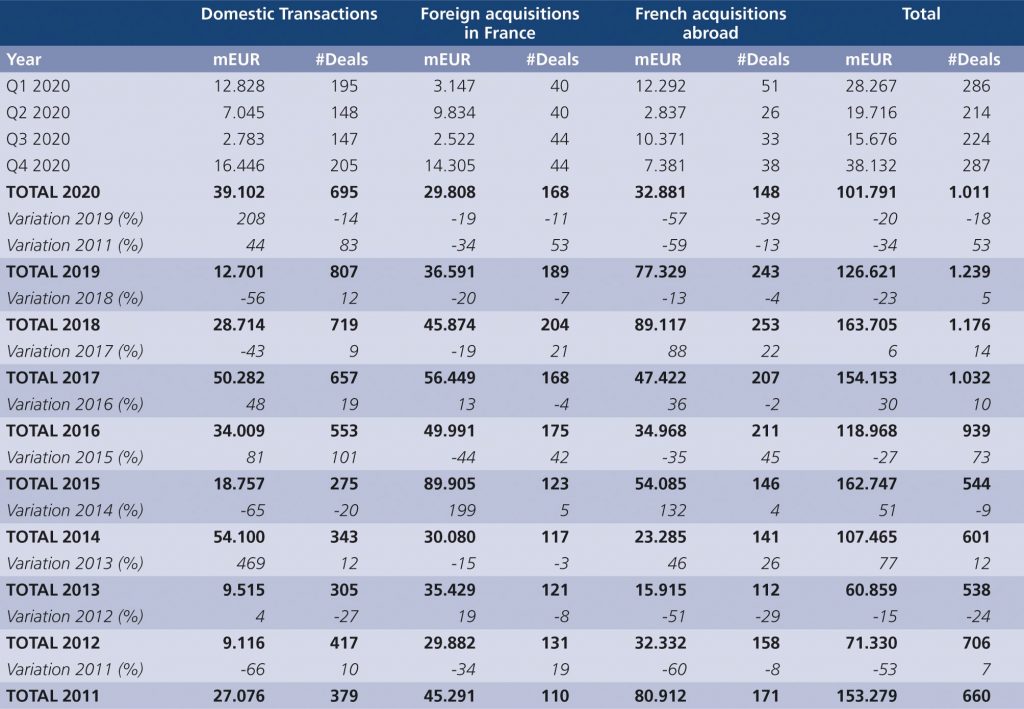 In our statistics, transactions in this area are part of the 3 main areas mentioned above. 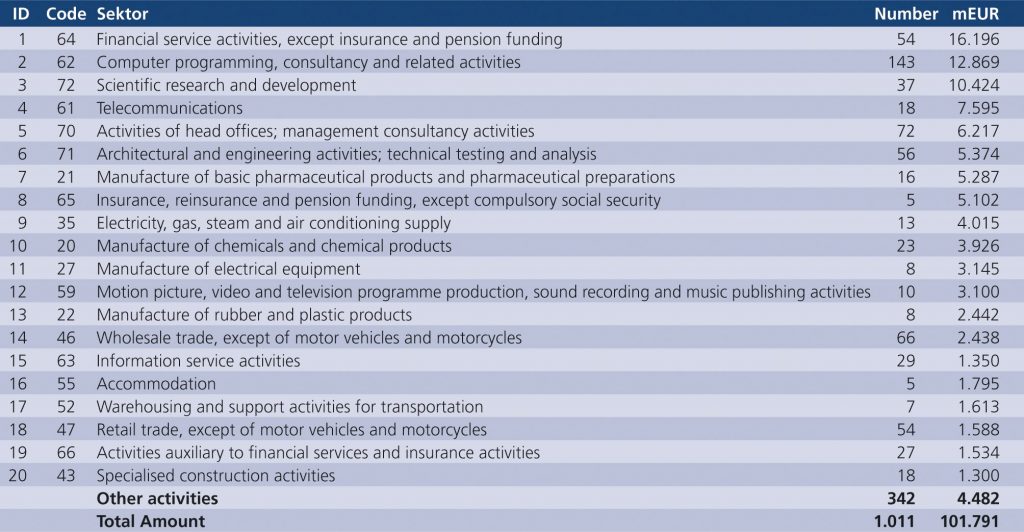 5. The most dynamic sectors

The classification by sector of activity is based on NAF codes of the target companies.

In 2020, the most dynamic sector was “Financial services, excluding insurance and pension funds” with 54 transactions with a total value of more than EUR 16 billion. This sector was in third place in 2019.

– Second place went to the “Programming, consulting and other IT activities” sector (No. 4 in 2019), with 143 deals worth almost EUR 13 billion (by far the No. 1 sector in terms of number of deals).

Third place goes to the “Scientific research and development” sector (not among the main sectors in 2019 in terms of value) with EUR 10.4 billion for 37 deals in 2020, followed by the “Telecommunications” sector with 18 operations and EUR 7.6 billion (No. 6 in 2019). 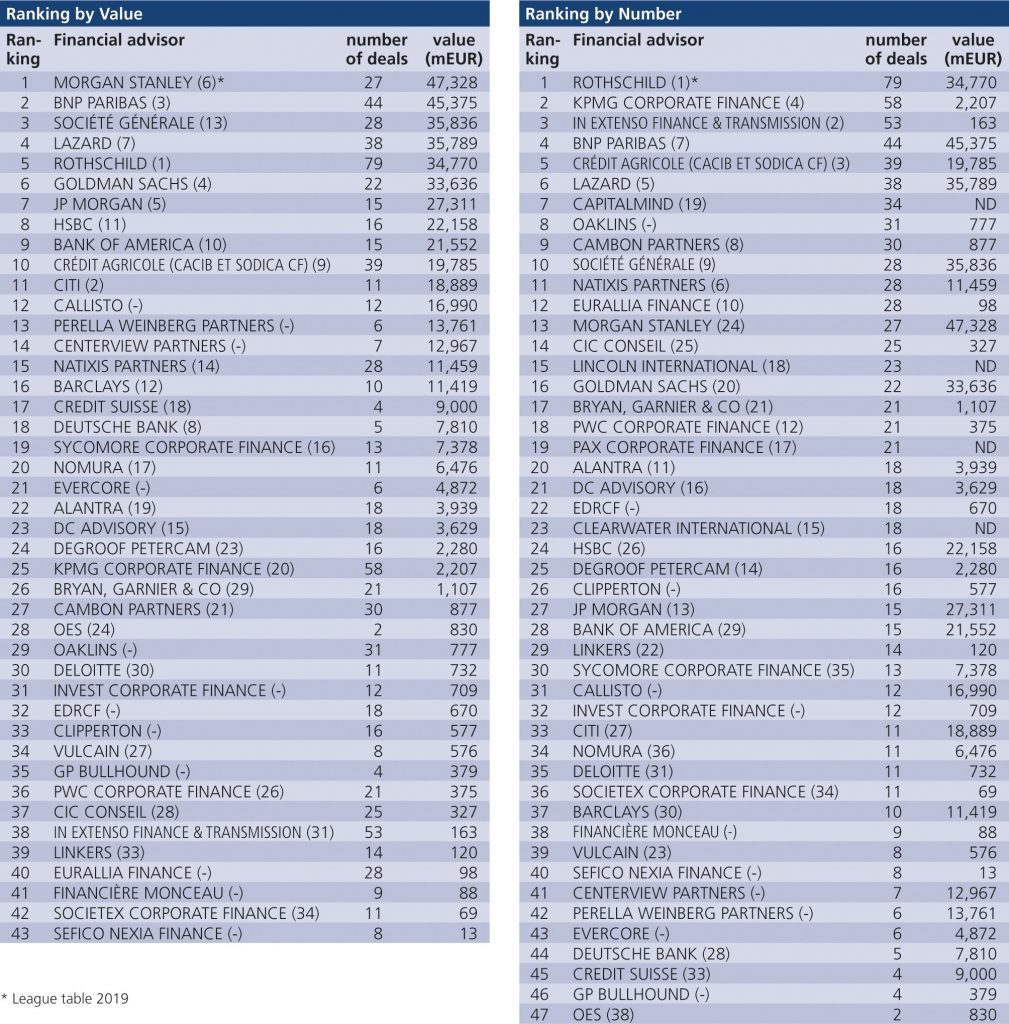 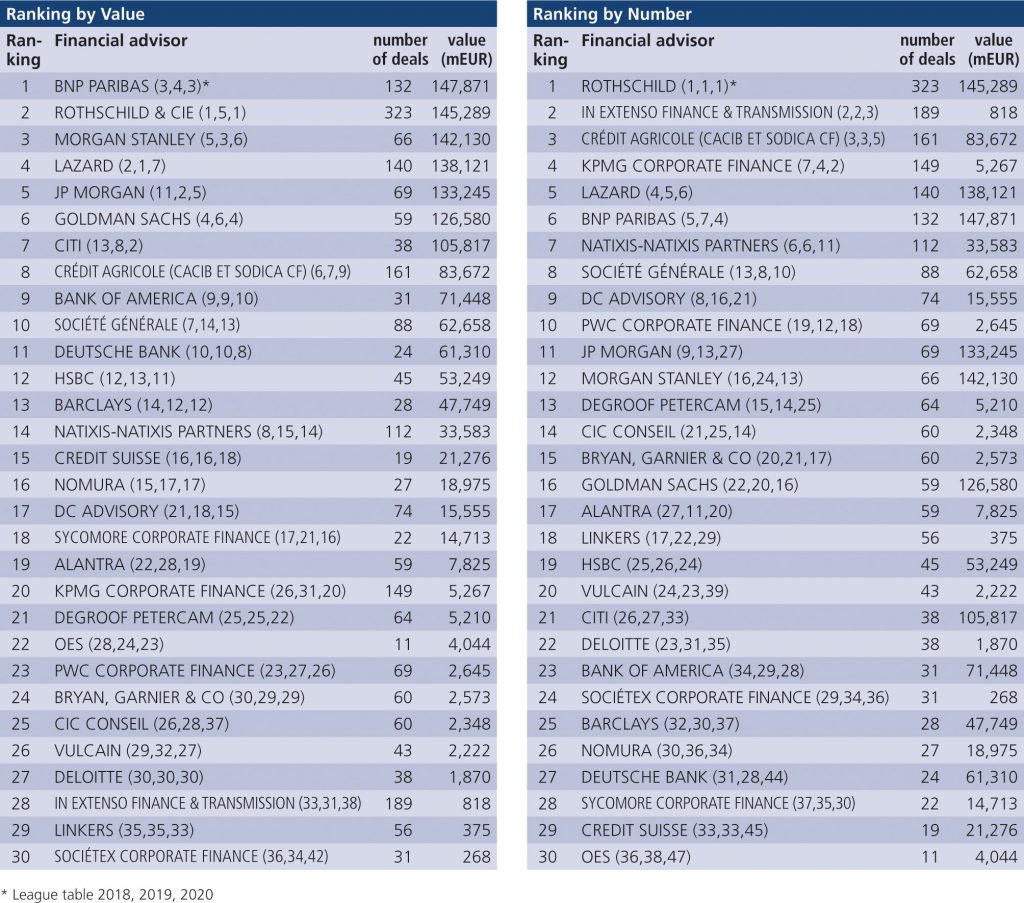 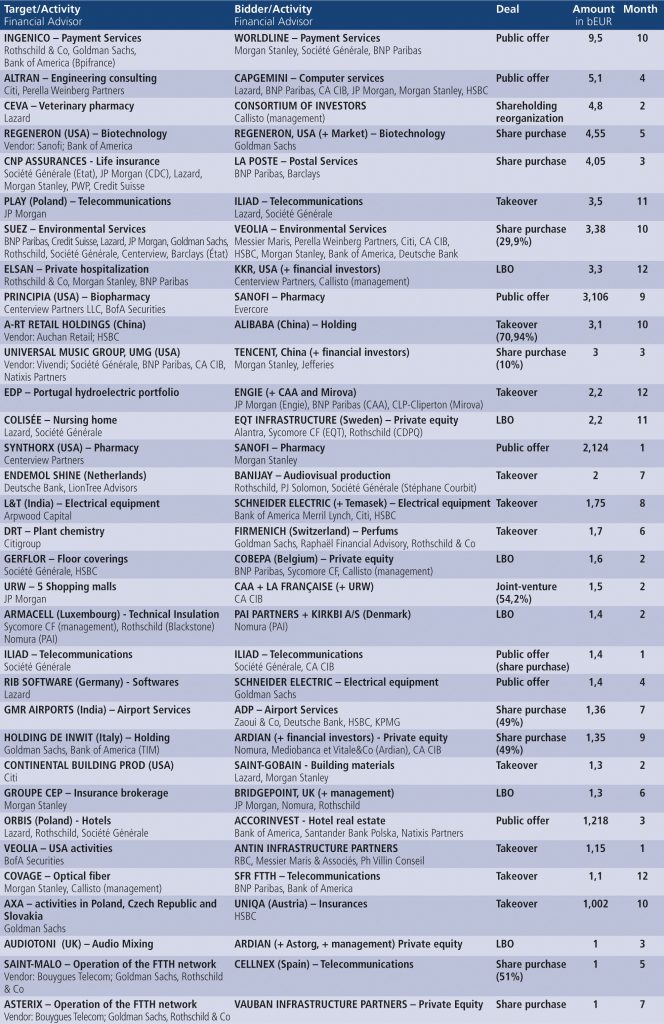 “In 2020, we made deals all over the world without leaving Paris”

The year 2020 – as seen by Investment Bankers Deutsche Bank