Global equity capital markets are reaching new heights with record numbers of deals and deal volume. Much of this deal activity can be attributed to recent popularity in Special Purpose Acquisition Companies (SPACs). The number of SPAC listings has seen a drastic increase to 248 listings in the US in 2020, only to be surmounted by a total of 313 SPAC listings in the US since the start of 2021 alone1. Blank-cheque companies have become a significant source of global deal-­making, and while most of this activity has been taking place in the US, Europe seems to be catching up, although at a far slower pace. It can be observed that the majority of SPACs are looking for and engaging with tech and growth-stage companies that see various benefits in partnering with a SPAC rather than remaining a private company for a prolonged period of time or undergoing a traditional Initial Public Offering (IPO) process.

2. Structure of a SPAC

SPACs have no operational business and are initiated by sponsors who are usually experienced and prominent investment professionals and/or business operators representing the SPAC to the public. These shell companies list on a stock exchange with the purpose to raise capital from investors, which is put into a trust account to subsequently acquire one or more private companies. For SPACs listed since 2021, the average IPO proceeds have been $323m2. Investors receive units that consist of a common share and a fraction of a warrant that gives investors the option to purchase a fraction of a common share later. Sponsors usually receive 20% of the post-IPO shares outstanding in the form of founder shares. After publicly listing, the sponsors typically have 12 to 24 months to identify a target and to combine it into one company. Usually, the target has an enterprise value of 3-5x of the initial capital raised with the SPAC. If they fail to find and merge with a target, all investors receive their investment back minus fees for operating the SPAC plus interest earned during that period. Once a target is selected, the usual merger processes begin: due diligence, negotiation and signing of acquisition agreement and preparation of proxy statements. During this phase, the sponsors typically arrange Private Investment in Public Equity (PIPE) and debt financing. The last stage is the de-SPACing process, in which investors vote on the transaction at a general meeting. If a predefined majority for approval is reached and all regulatory requirements are met, the SPAC is going to complete the merger with the target. Investors who do not approve the deal can withdraw and get their investment back. Upon completion of the transaction, the target company will be listed on the stock exchange, and the ticker symbol will be adjusted to reflect the target’s name.

3. SPAC advantages over a traditional IPO and reverse merger

The mechanics of the initial placement of a SPAC are not very different from a traditional IPO, yet can be significantly faster and can be completed in 6–8 weeks. The sponsors incorporate the SPAC and file the S-1 form with the Security and Exchange Commission (SEC) or similar statement in their corresponding jurisdiction. Subsequently, the sponsors go on a roadshow to promote the SPAC and attract large institutional investors. After regulatory approval, the SPAC will list on the stock exchange and investors are able to buy shares in the vehicle via a traditional IPO process. However, the main advantages of a SPAC compared to a traditional IPO is the time it takes from identifying the target to listing it on a stock exchange and the overall nature of the process. After the SPAC is floating on a stock exchange and identified a target, the two companies can sign the Letter of Intent and close the transaction within 3–4 months and effectively publicly listing the target. That is substantially faster than the usual 6–9 months it takes from the initial prospectus to close of IPO in a traditional IPO process. There is also a general uncertainty connected with the timing of an IPO since it depends on market sentiment and can get canceled at the very last minute should the market be somewhat unfavorable. When contrasting the overall process of the transaction, a SPAC merger can be seen as an accelerated IPO process that takes less interruption to the company’s operational business, management and less overall preparation.

While one could argue that a SPAC IPO most closely resembles a reverse takeover (RTO), it offers additional advantages over an RTO. These advantages, for example, include the security of financing or growth capital and access to blue-chip institutional investors through the sponsors. Also, without thorough due diligence, it cannot be verified that the RTO shell company has no hidden debts or risks. The SPAC, compared to both IPO and RTO, has the considerable advantage of access to the experience, guidance, and contacts of the sponsors. Overall, this can make a merger with a Special Purpose Acquisition Company an attractive alternative for companies to access equity capital markets, get advice and the proper guidance during a transformative phase of the companies’ existence, which can be especially interesting for young and growing tech companies. In addition, target companies also might prefer that a SPAC considers forward-looking financials during the merger process, which can result in higher valuations in contrast to only taking historical numbers and total

addressable market into account. This can be very appealing for fast growing tech companies. Moreover, SPACs let retail investors participate in relatively young and aspiring companies, who may have deferred from the IPO process or chosen to do another round of growth capital instead. 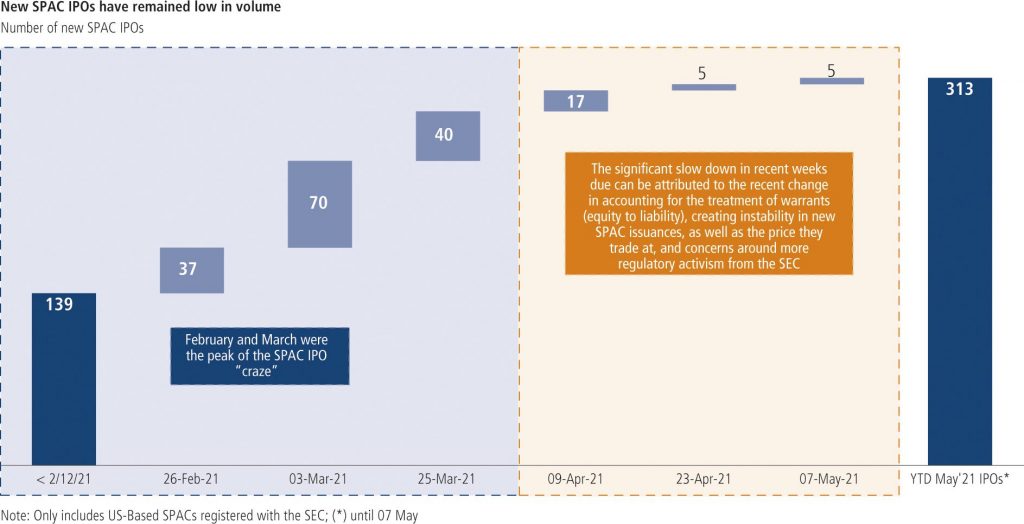 Fig. 2 • US SPAC activity slow down

4. Tech seems to be the focus

SPACs can acquire a target in any industry, but seem to be highlighting a specific target industry in their initial registration statement The most popular target sector for SPACs is the technology sector. Amongst the US-listed SPACs that have not yet announced a transaction, Technology, Media, Telecom (TMT) and Fintech focused Special Purpose Acquisition Companies combined account for the largest sector focus of SPACs. The recently listed SPACs on European stock exchanges prove that the strong tech focus in SPACs is not just a US phenomenon. Two prominent examples that got high media attention of the very few blank-cheque company listed on European stock exchanges since the start of the year are Klaus Hommels’ Lake Star SPAC I, which listed on the Frankfurt stock exchange, and Martin Blessing’s European FinTech IPO Company 1, which listed on the Euronext exchange in Amsterdam. Both blank-cheque companies raised €275 million and  €415 million respectively. While Lake Star SPAC I is looking to partner with European tech entrepreneurs, European FinTech IPO Company 1 is tailored towards European FinTechs. Both are prime examples of the strong tech focus that a significant amount of SPACs exhibit. There are several explanations for that distinct sector focus. One major reason is that a higher number of private companies in the tech sector at diversified stages of growth seek capital than more traditional industries. Therefore the need for growth capital from tech companies and the desire of SPAC investors for high returns and disruptive companies seem to be a perfect match.

It can be observed that SPAC listings are, as of yet, a rather US phenomenon with more than 95% of the SPACs listings taking place in the US, but of these, a majority can also invest in European targets. The fact that US SPACs are increasingly turning towards European targets can be partially attributed to the growing number of successful tech companies and “unicorns” in Europe, especially in London, Berlin, Paris, and the Nordics. Nevertheless, not only are US-listed targets looking to partner with European companies, the market is also observing an increasing number of SPAC listings on European exchanges. While in the US, the listing of SPACs has slowed down significantly, with only 22 listings in April 2021 compared to 110 in March 2021, it can be observed that the market in Europe is expecting an increased number of listings3. The German stock exchange in Frankfurt and especially Euronext in Amsterdam seem to be the go-to places for sponsors looking to list a blank-cheque company in Europe. The SEC has recently commented that the regulatory body wants to scrutinize revenue and profit projections made by targets merging with SPACs more closely and are investigating the accounting treatment of warrants. This could deter sponsors from listing SPACs on a US exchange. While recent plans of British investor Ian Osborne to list a $400m SPAC at Amster­dam’s Euronext exchange to target European tech “unicorns” with a vehicle that gives sponsors initially 10% instead of the usual 20% in promote shares, is a prime example for a revised structure of a SPACs that could make SPACs more appealing to investors and target companies.

It remains to be seen if SPACs can establish themselves in the long term and especially in Europe. However, the several advantages of merging with a SPAC regarding timing, process and sponsors guidance could establish SPACs as a worthy alternative for companies and especially relatively young tech companies to raise capital and access a broader investor base. 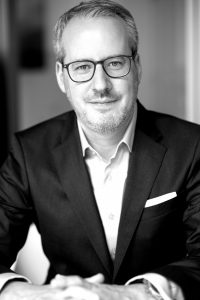 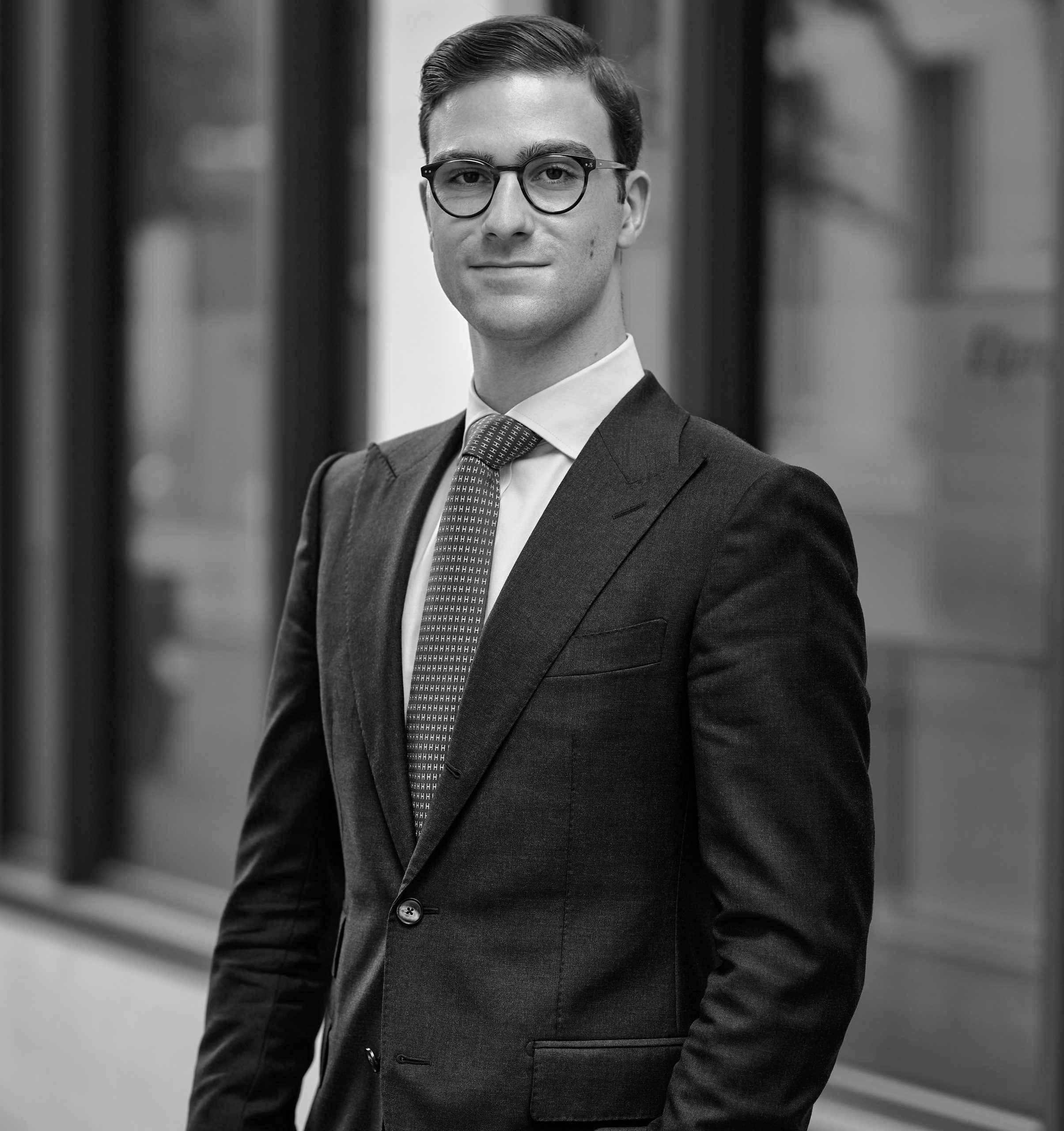 SPACs in France, an original approach to access financial markets likely to develop in France?